To cope up with what you call “writer’s block” let us shift to something fun, and let out the child within us.  Forgive me if I turn to my childish side, but my Qlick Internet Café also offers online gaming right? Ok what is DotA? DotA means Defense of the Ancients is a custom scenario for the real-time strategy video game Warcraft III: Reign of Chaos and its expansion, Warcraft III: The Frozen Throne. Warcraft has been around several years now, it started 1994 with it’s Warcraft: Orcs & Humans. Until now Warcraft: Defence of the Ancient has been around and has been constantly being developed by the developer is known by his pseudonym as “IceFrog”, and has been developing the game since 2005. 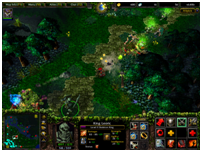 A brief about DotA… Defense of the Ancients pits two teams of players against each other: the Sentinel and the Scourge. Players on the Sentinel team are based at the southwest corner of the map, and those on the Scourge team are based at the northeast corner. Each base is defended by towers and waves of units which guard the main paths leading to their base. In the center of each base is the “Ancient”, a building that must be destroyed to win the game. The first hero or team destroys the Ancient will be declared the winner. DotA is like a chess game but interactive. The popularity of Defense of the Ancients has increased over time. The game is popular in many parts of the world; in the Philippines and Thailand, it is played as much as the game Counter-Strike until now.

Going back to my question who’s your favorite DotA charatacter? I love playing the character “Huskar – The Troll Warrior”, “Kardel Sharpeye” and “Kael – The Invoker”.But I play most of the time the hero – Kael (The Invoker), because it has the most number of skills that you can use and It’s a very versatile character too. 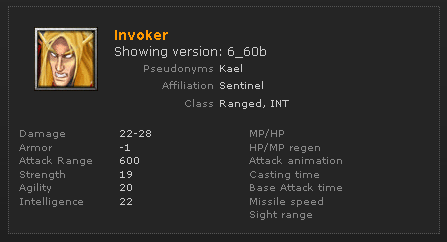 Kael can be an early game character and do first kill but can also owned you at the end game. I missed playing the game, I missed the sound of “OWNING!” (Jan, you know what I mean, right?).  The last version that I was able to play was version 6.59b, but now they have released the DotA version 6.64 map. So who’s your favorite DotA Character? Happy Birthday to JenaIsle our cool Nanay and dear friend.

Hi, I'm Jhong Medina, I'm just your friendly neighborhood tech blogger :). Hope you can join the discussion by sharing your ideas below. Thank you for visiting.

35 thoughts on “Who's your favorite DotA Character?”