Defense of the Ancient 6.68, You thought you’ve seen it all!

“Development is underway on the next patch DotA 6.69. It won’t take as long to release as the previous version did.” according to Ice Frog (Developer of DotA). But either way, here the latest characters from DotA 6.68. They said that, Icarus the Phoenix didn’t make his way to Dota 6.68 and probably will be included on the next map which is Dota 6.69. Dota 6.69 will probably contains a lot of balances after the huge changes on Dota 6.68. 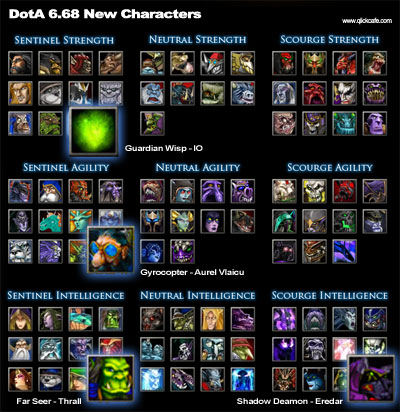 So below is the latest character from DotA 6.68:

Being raised by humans as a gladiator, Thrall learned more about strategy and tactics as a youth than even experienced orcish warchiefs learned in their lives. After escaping from the human slavery and meeting Grom Hellscream, he found out that he was a descendant of the Frostwolf clan. He traveled to his ancestor’s village, where he became familiar with the spiritual magics of the orcish shamans. Now he combines not only his control over thunder, but also his tactical abilities to turn fights in his favor using impenetrable walls of magic, areas of static energy and even control over time.

Originally nothing more than a lowly spirit of the trees, Io dwelt peacefully amongst his kind in the Great Forest. As the Great War spread across the land the creatures of the forest were forced to defend their home. The desire to protect his kin awoke power in Io he had not known he possessed. He discovered he was able to connect his life force to another creature to strengthen them or help them flee by instantly transporting them out of harm. Io became known amongst his people as the Guardian Wisp, a protector of the Spirits. All other spirits swore to assist him and can be summoned to his side to aid him in his battle. Uninterested in the battle between the Sentinel and the Scourge, Io fights only to protect his people.

Long before the war of the Scourge and the Sentinel, an ancient demon named Eredar waged war on all creation. No champion of Light could match him, but he was betrayed and killed by his own underlings. However, the faintest sliver of his shadow survived; over the millenia Eredar regained a portion of his former being and grows stronger each day, but in a twist of fate his new form was that of a gnoll. Eredar’s new form is not well suited to direct confrontation, but he knows a number of objurations and tricks to deal with his foes; his skills include banishment, poison, curses, and darker demonic arts.

Raised amongst the dwarven mining clan, Aurel grew up with a fascination for making things explode. Such tendencies were considered healthy in the mining society as a dwarf’s skill with explosives determined his pay, his rank and of course, his popularity amongst the females. Unlike the rest of the clan however, Aurel sought to use his skills for more than just blowing up rocks. By combining controlled detonations with thick metal to direct their force, Aurel is able to create everything from engines to missles. Excited to be able to put his inventions to the test, Aurel’s presence on the battlefield promises to be a blast!

These four new exciting character are something to take  experiment for. I’ve been using IO the Wisp Guardian for quite a while and as a range strength character I find it very ideal in team game. IO is has a very strong harassing skill, the Spirits can be used to escape also to chase a enemy hero. The damage looks first very low – but when all 5 spirits hit a enemy hero, he takes good damage. The increasing and decreasing the range the spirits dances around Io is useful too. Increase it when you lane to screw the enemy’s denies also their last hits. Decrease it when you’re very near to them. Another interesting to try is Gyrocopter, even though I’m having trouble pronounce his name, Gyrocopter is so easy to handle. I like his skill set and it effects too. With this character you will be able to have first kill as easy a one two three.  So guys take your pick.

Hi, I'm Jhong Medina, I'm just your friendly neighborhood tech blogger :). Hope you can join the discussion by sharing your ideas below. Thank you for visiting.