Fujifilm Philippines together with YKL color, opened its first concept store in the Philippines at the lower ground level of building A, SM Megamall recently, the first to be launched among similar stores Fujifilm Philippines aims to open, alongside its developing business. The flagship store will carry YKL photo processing products and Fujifilm’s line of digital cameras, the X series and Finepix cameras closer to the consumers. The X series line boasts of stylish designs, that combine aluminum and leather, resulting in sleek, sophisticated, retro-inspired cameras that appeal to the urbane. 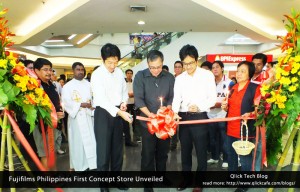