Last November 3, 2021, Scopely released a new version of Marvel Strike Force Version 5.8.x. and when we updated the game, we may encounter the “Update Available” appearing several times. To resolve this new release not loading problem you may need to go to your App Store (for apple) or Play Store (for Android) and uninstall the game for a while. Don’t worry about your progress, as long as it’s linked to Facebook and or Apple ID/Google Play there is no harm in deleting and reinstalling had the same issue on my Android/IPad last week deleted app restarted iPad and reinstalled with no problems.

I believe you have to wait for at least an hour before you install again. This is just to make sure that all the data on your device cache are fully deleted. This will also make sure we have all the new files and game data installed.

Worrying about your account progress, google play store or apple app store will restore them for you once you re-install the game again. Install the game and the new release loading problem or issues are hopefully resolved.

Since last November 5, 2021 Marvel’s The Eternals are already in the Big Screens in the United States, Marvel Strikes Forces also introduces Dormammu, Sersi, and Ikaris as New Characters in the game.

That’s why in this release, you can expect the following updates:

Furthermore, the new release version will also deals with the following bug fixes:

Meantime, if you still have issues after the reinstallation and still having the new release not loading problem, try to visit my post about the “stuck on 42% Loading” articles that i wrote few years ago or visit there facebook page for how to install the game again. You can also comment your issue below, I’ll do my best to help you out with the problem. Good Luck and Stay safe! 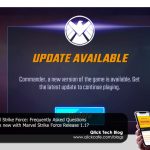 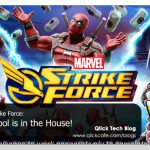 Marvel Strike Force – Deadpool is in the House!