Defense of the Ancient Rise of the New Hereos

On the latest version of DotA (Defence of the Ancient) 6.66 new characters was added by Ice Frog. The latest DotA version 6.66 was release last January 13, 2010 which corrected map exploits and bugs.

The Newest Heroes are: 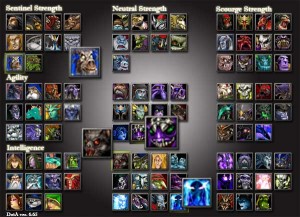 In the deepest, blackest pits of the ocean a fearsome and terrifying creature lurks. Bending the shadows to his will, few have seen his true form and none have lived to speak of it. For the shadows are his sanctuary, a place of empowerment and revitalization. Bathed in this impenetrable darkness he strikes unseen, every attack making him swifter and more powerful whilst weakening his enemy. A unbreakable leash awaits all who try to escape, leaving them at mercy of this horrifying phantom. By sacrificing a fraction of his soul, his pact with darkness allows him break even the most powerful bonds and curses. With echoes of the Great War reaching every corner of the earth, this creature, known only as Slark, has emerged from the depths to search for an ancient relic…

About Kaldr
Defeated in a battle long forgotten, this once great mage was banished to a tomb of ice for all eternity. For countless ages he lay in unbearable anguish until he was discovered by minions of the Lich King. In a vain attempt to gain favor with this ancient soul for his own purposes, the Lich King released him. But this soul no longer knew gratitude, it no longer knew friend from foe, it knew only pain. With it’s body long since decayed, the soul took up the only form it knew. Consumed with hatred, even a touch from this monstrosity causes agony. Able to conjure devastating ice storms with a mere thought and hurl soul-shattering bolts of frost seemingly impossible distances, this creature punishes all who dare to stand their ground against it.

Since ancient times it has been prophesized by the Tauren elders that a Chieftain will come, strong as the mightiest warriors and wise as the eldest shamans. After many years of wandering the sacred lands, seeking wisdom from his forefathers, Cairne Bloodhoof has proven himself as the long awaited hero. Cairne carries with him the spirit of his mightiest ancestor, and now the ground shakes with the combined strength of the Chieftain and his guardian spirit. No physical nor magical barrier can reduce the power of his enchanted halberd, the weapon used by his guardian in ancient times. Such is the power of this axe that it can split the very earth itself. Seeking revenge for the ravaging of his homeland, Cairne will soon bring his wrath upon the Scourge.

About Jin’zakk
Once an expendable spy, Jin’zakk has outlived the suicidal tendencies of other Bat Riders to create a unique style, one that favours control and precision instead of wanton destruction. His years of battle experience have allowed him to innovate creative uses for his fiery arts: He can douse enemies in a bath of sticky oil that restricts their movements before igniting it, fire an explosive that blows enemies away, or take flight to leave behind a trail of flame. However, his most deadly skill involves lassoing his opponent and dragging the unfortunate foe into the arms of his allies.

Since the release of these new heroes, I’ve been enjoying skills of the Bat Rider specially the stick napalm and flamebreak combo. It’s awesome for farming creeps.

Have you tried one these heroes? Can you share your level and item build guide. Enjoy!