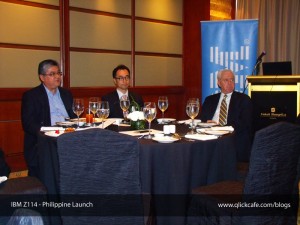 Last Friday – August 5, 2011, IBM announced the launch of  IBM Z114 zEnterprise Mainframe Server in the Philippine market. At Makati Shangrila Plaza, IBM introduced the new IBM zEnterprise 114 mainframe server a mid-range version of IBM Z196.  The new server, which allows mid-sized organizations to enjoy the benefits of a mainframe as the foundation for their data centers, costs 25% less and offers up to 25% percent more performance than its predecessor, the System z10 BC server.

It is projected that clients can consolidate workloads from 40 x-86 processors running Oracle software on to a new z114 with just three processors running Linux3 and over a three year period, total costs for hardware, software and support on the new z114 as compared to consolidated servers can be up to 80% less with similar dramatic savings on floor space and energy.

The availability of IBM Z114 in the Philippine Market, enables local mid-range to corporate enterprises the power to deploy online and internet banking with unmatched security, availability and transaction integrity in massive scale, at reduce cost. 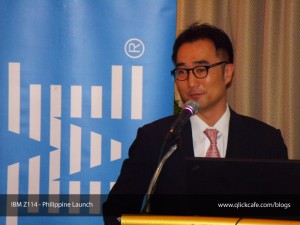