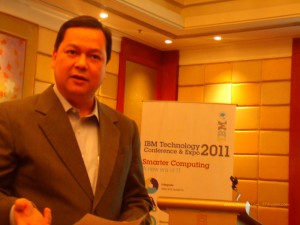 IBM Watson, came from the named of IBM founder Thomas J. Watson. The software runs on a supercomputer with 2,880 IBM Power750 (formly known the AS400) cores, or computing brains, and 15 terabytes of memory. Watson won $1 million form the game “Jeopardy!” and all of its winnings will be donated to charity.

Mr. Steven Seah, IBM ASEAN Systems and Technology Group Executive, defines Watson as “an analytical computing system that specializes in natural human language and provides specific answers to complex questions at rapid speeds.” He also added that, “Watson can process 500 gigabytes, the equivalent of a million books, per second. It can process and analyzed structured and unstructured form of data or information.” According to IBM, Watson information was stored in a four terabytes of disk storages which contains 200 millions of structured and unstructured information. With this power, this will be a big innovation for Search Engines in which it can provide more accurate and specific answers. IBM wants Watson to represents the latest in a long line of groundbreaking innovations from a company dedicated to building a smarter planet. In which it will provide us the power of analytics for better decision making.

3 thoughts on “IBM Watson aims toward a “Smarter Planet””